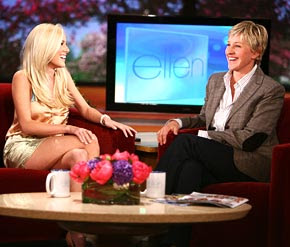 Where's Vince McMahon? The WWE would be a perfect place to settle this once and for all..................
US:
Heidi Montag doesn't miss her once-close friendship with Lauren Conrad
"It's kind of like a weight off my shoulders," the Hills star said of the demise in a taped interview with Ellen DeGeneres airing Monday.
"Towards the end of our relationship she was just always yelling at me and nagging at me because she didn't like my boyfriend [Spencer Pratt]," Montag said.
"She had a boyfriend I didn't like for several years but I didn't really think that was my job [to say anything]," she added. "I was kind of like let's just go our own ways."
Montag and Conrad's friendship – they were once roommates, too – fizzled over their different opinions about Pratt as well as Conrad's claim that Montag and Pratt spread rumors that a sex tape of Conrad existed.
The once BFFs had not been together for about two years until they were photographed for the current cover of Rolling Stone.
"They're all having fun and I'm like let's just get it done," Montag said of the shoot, which also included Hills co-stars Whitney Port and Audrina Patridge. "I mean... awkward!"
on May 11, 2008