Denials of Kate Hudson and Owen Wilson's engagement are imminent! 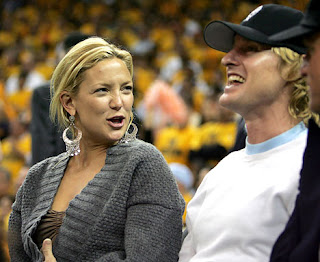 From what I understand, the pair are not engaged. Get ready for the denials from the reps.................
Star Pulse:
Hudson and Owen Wilson are reportedly engaged - after the actress was spotted sporting a diamond ring on her wedding finger on Thursday.
The blonde beauty was seen wearing the huge sparkler outside a Boston, Massachusetts restaurant , fueling speculation the on-off couple is taking their relationship to the next level.
The pair met on the set of 2006 movie You, Me & Dupree and were romantically linked later that year, after Hudson split from her husband of six years, The Black Crowes rocker Chris Robinson.
The couple parted ways in June 2007, just two months before Wilson's alleged suicide attempt, with rumors claiming the end of their relationship was the reason behind the attempt on his life.
However, in recent months the stars have appeared to rekindle their love, and spent Easter together in March in Miami, Florida. They were also spotted enjoying a lunch date with Wilson's parents on Hudson's 29th birthday last month, where onlookers described the pair as "lovey-dovey".
A source tells Britain's News Of The World newspaper, "Kate supported Owen during his low patch and that proved to him she's the woman he wants to be with for ever."
The source adds, "The engagement is a natural step for them both."