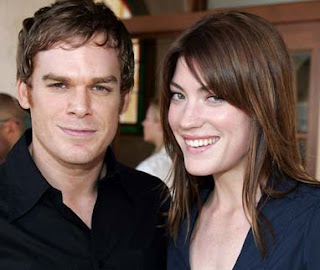 E!: Dexter knows how to dispatch the bad guys. Let's hope he has the same success with this.
Michael C. Hall has announced he's been diagnosed with a nonlethal form of cancer and is already on the mend.
The 38-year-old Dexter star said he's suffering from Hodgkin's lymphoma, but that the disease was caught at an early stage in a "treatable and curable condition." He's currently receiving treatment at an unidentified Los Angeles-area facility, Hall said, and the cancer is reportedly in complete remission.
And he's definitely not letting it get in the way of a good time.
Hall is expected to join his actress wife, Jennifer Carpenter, at this Sunday's Golden Globe Awards, where he's nominated for Best Actor for his titular role in Showtime's serial killer hit, as well as the Jan. 23 Screen Actors Guild Awards.
The fifth season of Dexter is set to premiere in September.