Arc Angels make a triumphant return with their amazing "Living in a Dream" CD/DVD release. 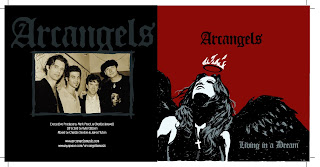 Let me start by saying that I'm a huge fan of the Arc Angels. Charlie Sexton was a favorite of mine back when he was a teenage phenom with his rocking "Beats So Lonely" hit in the 80s. When Sexton joined up with the amazing Doyle Bramhill II and Stevie Ray Vaughn's "Double Trouble" to form Arc Angels in 1992, I listened to their debut CD non-stop.......and still do! "Sent By Angels" became a radio staple and I couldn't get enough. Due to some in-fighting and Bramhill's drug problem, the band never recorded a follow up and drifted apart...... until now. 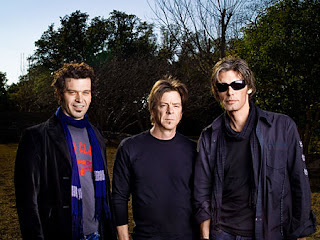 Being a fan, I jumped at a chance to review their new "Living in a Dream" release. The CD/DVD concert is fantastic. The duel guitars and vocals of Sexton and Bramhill rock with a force. Tommy Shannon and Chris Layton are the consummate pros, providing a rhythm section not easily matched. The sound is great, what even moves me more are the smiles on the faces of the men on stage. They seem happy to be among friends, playing music that is true rock! The DVD includes a documentary that features interviews with the band. The guys give honest stories of their good times and their difficult times. The release also features a bonus CD with 3 new tracks. Shannon has left the band on friendly terms for health reasons, but the remaining mates prove that there is still magic left in the Arc Angels. In an age of over-produced acts who lip sync, this Arc Angels release is a rare gem. Rockers at the top of their game playing and singing true rock live. I urge you to take a look and listen at the links below and jump on the Arc Angels wings. It's a great ride! 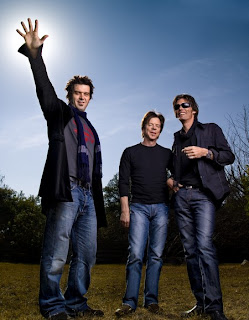 BUY "Living in a Dream".

Watch "Living in a Dream" live

Doyle Bramhall II – lead guitar/lead vocals
Charlie Sexton – lead guitar/lead vocals
Chris Layton - drums
Formed in the musical hotbed of Austin, Texas, the Arc Angels consist of some of the finest musical talents to ever play an instrument. With a devoted and adoring fan base, the Arc Angels are known as a tremendous band with an equally tremendous story. That story began in 1992 after the devastating loss of their friend and fellow musician Stevie Ray Vaughan. The miracle that came from that loss was the unique sound of four musicians aptly named – The Arc Angels: drummer Chris Layton and bassist Tommy Shannon (the veteran rhythm section of Stevie Ray Vaughan’s Double Trouble) coupled with musical wonders Charlie Sexton and Doyle Bramhall II sharing lead vocal and lead guitar duties.
The foundation of the Arc Angels was laid at the Austin Rehearsal Center (ARC) which so aptly gave them a name. There, Sexton had a writing room to work on his next solo album, Bramhall was working under a development deal with Geffen Records, and Layton had a drum room where he would often practice. The initial idea had been quite simple; create a band that can jam when people happened to be in town or not on tour with Stevie. But Vaughan’s death changed everything. When the foursome came together, press were quick to dub them a “Texas supergroup,” but the guys shunned that tag. The band was purely a musical outlet and inspiration to all of them.
Not intending to be a recording band, the guys played live and just for fun, opening for the likes of Robert Cray. But they soon found the excitement and challenges of being a band, worth the effort. Sexton and Bramhall tabled their solo projects and began creating music specifically for the Arc Angels.
The band’s 1992 debut album release, Arc Angels, on Geffen Records met with much critical acclaim and managed to break onto the Billboard Top 200 chart. The sound was unique -- raw and intense rock and roll steeped in the roots of Texas blues, but still radio-friendly and widely appealing. The group toured heavily after the album and on Tuesday, June 9, 1992, the Arc Angels made their network television debut on the NBC show " The Late Show with David Letterman" where they performed "Living In A Dream". On Wednesday, January 6, 1993, they again performed on Letterman's show, this time playing "Too Many Ways to Fall". It seemed that this Texas quartet was poised to explode onto the national scene.

But their name proved a harbinger of things to come; The Arc Angels fell as quickly as they rose. Creative differences, heavy touring, and Bramhall's admitted descent into a deep and nearly deadly heroin addiction caused the breakup of the band in 1994. The Arc Angels came to an abrupt halt in October of that year with a series of farewell concerts at Austin's Backyard outdoor venue.
They each followed their individual paths from there. Bramhall went on to solo projects as well as touring with Roger Waters and Eric Clapton's band. Sexton made two critically acclaimed solo albums, toured with Bob Dylan, and has produced numerous high profile artist projects. Meanwhile, Layton recorded three albums with the Texas soul quintet Storyville and has backed such artists as Buddy Guy and John Mayer.
Nearly fifteen years after headlining the Austin City Limits Festival, the Arc Angels have decided to reunite and record new music, as well as release a Live DVD/CD. This time, the band consists of original members Bramhall, Sexton and Layton only.

"Charlie and I started to write together again and decided that we should get the band back together. The chemistry that we all have together is one entity and it's something very real. It's fun," said Bramhall. “We’re trying to take advantage and savor the good things and one of the good things is the Arc Angels,” added Charlie Sexton.

The launch of their new music and live tour will be at Austin's annual South by Southwest Music Festival in March 2009. Following that, they will open for Eric Clapton on his European tour in May, and then embark on their own U.S. tour this summer. “The stars kind of aligned once again. The band's back together and we're doing some new things," said Layton.

Musical Backgrounds
All Texas-born, none of these band members accidentally fell into music. It is part of their collective DNA.

Doyle Bramhall II
Saying that he was born with the blues in his blood is no exaggeration. Doyle Bramhall Sr. played drums and sang with Jimmie Vaughan (older brother to Stevie) with The Chessmen in the late 60’s and later with Stevie in The Nightcrawlers. In the early 1970’s, the Vaughan’s and the Bramhall’s lived together sharing musical talents in a big Austin home. Although he started on drums, Bramhall switched to guitar at 14 when his father gave him a vintage Harmony Rocket presented to Doyle Sr. years earlier by the legendary Lightning Hopkins. Playing the guitar left-handed, Bramhall began playing in clubs at 15 and for a time he even joined Jimmie Vaughan’s group The Fabulous Thunderbirds.

Charlie Sexton
Sexton was quickly considered a child prodigy when he picked up the guitar at age 4 and began performing onstage at age 11. He became Joe Ely’s lead guitarist at age 13, was touring at 15 opening for The Clash, and made a solo debut album at age 17. Both the album and the single, “Beats So Lonely” were Top 20 Hits. Touring the world followed, including a tour with Bowie, and later recording with greats such as Bob Dylan, Don Henley, and The Rolling Stones’ Keith Richards and Ron Woods. Sexton has also developed a strong career as a producer, working on numerous high profile albums for artists such as Lucinda William, Marc Cohn, Edie Brickell and newcomer Matt Morris with Justin Timberlake.

Chris Layton
A staple on the Austin music scene since 1975, Layton made his mark as part of the hugely successful Stevie Ray Vaughan rhythm section Double Trouble. His talents have led him to recording and touring with Austin-based Storyville and host of others including Kenny Wayne Shepherd on his most recent Ten Days Out Legends Tour.
on December 06, 2009