Favorite in Miss Plastic beauty contest tears a ligament because of not being used to the weight of her new implants. 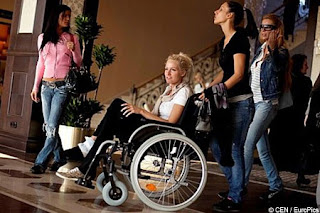 Metro:
We bring you an urgent update about the progress of the Miss Plastic beauty contest. The hot favourite to win the contest - which is only open to women who have had cosmetic surgery - has been forced to withdraw due to injury, after her breast implants caused her to trip over her high heels.
Blonde Alexandra Horvath, 23, tore a ligament when she fell after passing the breast examination stage of the contest with flying colours.............

The silicone boob implants caused Alexandra to lose her balance as she tried to walk in her high heels - tearing a ligament and eShe toppled over on the catwalk and tore a ligament in her foot. Onlooker Laszlo Feher said: 'Everyone was admiring her bodywork and then she started to topple - no-one was near enough to reach her and she fall badly. She was taken to hospital by ambulance.'
A friend said: 'She had not got used to the extra weight on top and her new hair extensions got in her eyes - she just lost her balance and tore a ligament in her foot badly. ending up in hospital.
on October 11, 2009