Jennifer Garner pulled pranks on Ricky Gervais on the set of "The Invention of Lying". 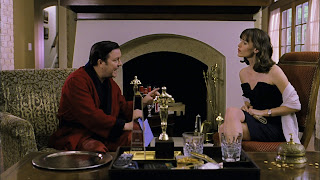 LOVE her!
NY Daily News: "Ricky had a few specific rules on-set," Robinson revealed. Among his quirky (okay, complete pain-in-the-butt) tics: no gum-chewing, no cell-phone talking, no snorting and no standing in his line of vision while shooting. (We're hoping Robinson counts himself lucky for having just one star with an ego.)
But the delightfully complacent Garner didn't argue with the rules; instead, she decided to let her inner child loose and give her co-star a little payback. On the last day of filming, the actress made an executive decision: She would break all of Ricky's rules in one day.
Said Robinson: "In the middle of taping, Jen's cell phone went off, and she pretended it had happened accidentally. Ricky got really annoyed."
But Ben Affleck's other half didn't stop there. Laughed Robinson, "All of a sudden, Jen started chewing gum and Ricky's going, ‘What are you doing?' And then she snorted. He didn't catch on until the entire crew started laughing."
Garner wasn't the only person to play pranks on the funnyman.
"On the very last day of shooting, every single person on the crew blasted Ricky with Nerf guns the minute he walked out of his dressing room door for the last take," Robinson said, before adding one final plug for the flick: "It'll all be on the DVD."
on September 19, 2009