Katie Pierce and Peter Andre split because they haven't had sex for two years! 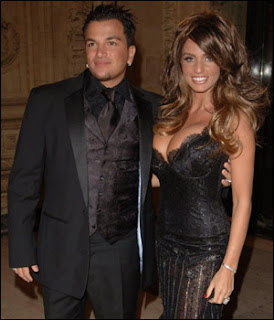 I can't wait to hear the other side......
News of the World
The marriage of Britain's most famous fantasy girl pin-up has been virtually SEXLESS for two years.
Last night in an emotional confession to pals, 36-year-old singer Peter said: "I've been saying for a long time it was a case of 'when' not 'if' we divorced. The relationship's been going under since 2007 but I was terrified of missing the kids."
Jordan, real name Katie Price, also admitted the first sign of them heading for the rocks came when their sex life went quiet.
She told a friend: "We'd lost that passion in bed. I know it goes after a while for everyone but for us it had been so good, so important, so hot."
A pal of Peter told us: "Things haven't been right in the bedroom for almost two years. To put it bluntly, Jordan stopped fancying him. It caused big problems because she has a huge sex drive."

"When we met on I'm A Celebrity, his career was over. I turned that around. He's broken every promise. I'll never forgive him."