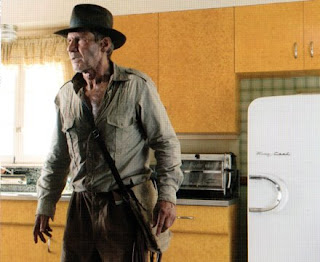 Slash film:
The Urban Dictionary has added an entry for “Nuke the Fridge”, a contemporary replacement for the slang term “Jumped the Shark”.
Jump the Shark is a reference to a scene in an episode of Happy Days when Fonzie literally jumps over a shark while water skiing. The scene was considered so preposterous, and is considered by many to signify the moment in time when the show became unappealing to its core audience.
The new term Nuke the Fridge is based on an event in the opening sequence of Indiana Jones and the Kingdom of the Crystal Skull.