"Get Smart" crushes "The Love Guru" at the box office! Steve Carell beats Mike Myers in the battle of the funnymen. 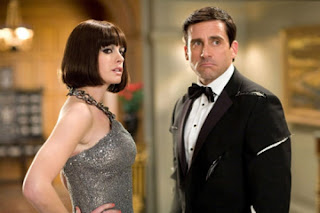 Access Hollywood:
Audiences still get Maxwell Smart.
Steve Carell and Anne Hathaway’s “Get Smart,” the Warner Bros. big screen update of the 1960s spy sitcom, raked in $39.2 million to debut as the No. 1 weekend movie, according to studio estimates Sunday.
But movie-goers did not get Mike Myers’ “The Love Guru,” the weekend’s other new wide release. The Paramount Pictures comedy about a self-help mentor took in just $14 million to open at No. 4.