"24" star Marisol Nichols is knocked up with a future Scientologist! 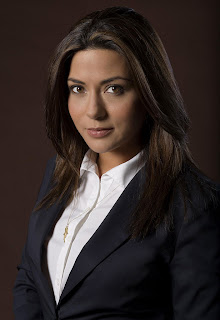 E!:
The biological clock is ticking for one of the stars of 24.
Marisol Nichols, who plays Special Agent Nadia Yasser on the Fox hit series, tells E! News exclusively that she is pregnant with her first child and due in late October.
The 34-year-old actress and her director husband, Taron Lexton, 25, have five names picked out for their baby girl, but Nichols says, "I'll know which one to call her when I meet her."
E! News caught up with the new-mom-to-be at the same Bally Total Fitness center in Los Angeles that is frequented by Britney Spears. As the fitness chain’s celebrity spokeswoman, the über-toned Nichols is taking Pilates throughout pregnancy to help snap her body back in to shape after the baby is born. She hopes to return to work soon after giving birth.
Nichols and Lexton met last year when they were seated next to each other on a cruise.
"It was one of those love-at-first-sight things where we stayed up for two days talking about everything," Nichols says.
The couple, who are both members of the Church of Scientology, were married April 13 at the Celebrity Centre in Los Angeles.
on May 18, 2008