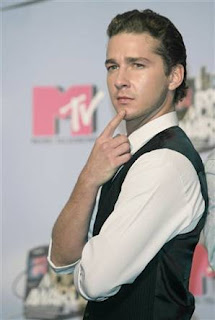 Being arrested at Walgreens isn't going to help his street cred.
CBS
You may have seen him stubbornly standing up to an invasion of evil robots this summer in "Transformers," but if you were in downtown Chicago early Sunday, you may have seen him stubbornly standing up to security guards at a local Walgreens.Chicago police say actor Shia LaBeouf was arrested at the Walgreens at 757 N. Michigan Av. around 2:30 a.m. Sunday after repeatedly refusing to leave the store.A security guard repeatedly told LaBeouf that he wasn't welcome and had to leave because he appeared to be drunk, police said.When the actor refused to leave, the security guard detained him and called police.After he was arrested, LaBeouf was "very courteous and polite," and he posted bond before 7 a.m., police said. LaBeouf, 21, of Glendale, Calif., was charged with misdemeanor criminal trespassing. He is scheduled to appear in court in Branch 29 on Nov. 28 at 9 a.m.
on November 04, 2007