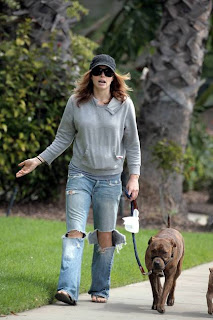 It's not easy interviewing Jessica Biel. Is she nasty? No. Is she a tough interview? No. Is she unreliable? No. So, what's the problem? She launches 2 massive Pit Bulls at you to greet you......
The Sunday Times:
Strange noises are coming out of Justin Timberlake’s girlfriend’s hotel suite. Standing in the hallway, just outside the door, I hear grunting, panting, scurrying and what sounds like frantic jingling. Just as I’m beginning to wonder if perhaps now isn’t the best time for an interview, the door swings open to reveal the woman once named the “sexiest alive” – and a pair of excited pit bulls straining against her grasp. “It’s okay, they just want to say hello,” says Jessica Biel. They still look pretty intimidating, but that doesn’t stop her releasing the muscle-bound hounds, which then launch themselves at me like missiles.
on September 02, 2007