What does Val think of Captain America? 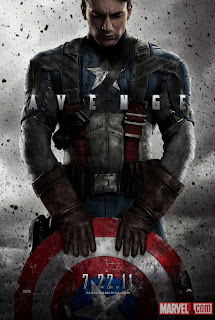 Not a fan of recreating the wheel , I rarely have the patience to start a review with a thorough (but spoiler-less) outline of the plot (that’s what rotten tomatoes is for). I just want to get to the good stuff in other words getting to what I think about it! But as I’m a consummate professional (in my mind anyway), here’s my attempt at a summary: our hero is a weak and wimpy young man with a heart of gold and a courageous inherent nature at the dawn of America entering WWII. He gets chosen for genetic enhancements which would make him the prototype for a new kind of soldier – one that’s stronger, quicker and faster-healing than the normal soldier.

The 3rd Reich wasn’t going to let the super-duper army be built so easily so due to their intervention, he ends up being the only one. With no field experience he gets relegated to the role of marketing mascot for young men to join the army (before they started using conscription). The marketing tool (him) was thus named Captain America. But eventually he gets into the action fighting the big bad Hydra, an extremist wing of the Nazi party (which sounds weird, as if the Nazis weren’t extreme enough) but Hydra has some of their own supernatural tendencies. Ok, that was exhausting to write, hope you’re all still with me. If so, here are 5 observations I made watching Captain America: The First Avenger.

1. Not too rah rah America

In many ways it was a big, Hollywood film with the booming soundtrack and dramatic pauses and close-ups. But I was glad to see that it wasn’t over the top patriotism. Raised in America, I’m ingrained with a respect for the flag and appreciation for our liberties, but it’s refreshing (especially living in the UK now) watching an American film where that is rather subtle and not forcefully fed it down our throats. Unlike Independence Day (which I LOVE), there isn’t a “America’s here to save the day” message. Of course we always do, everyone knows that, but no one likes to have the knowledge it forced on them (I kid, I kid…kinda). 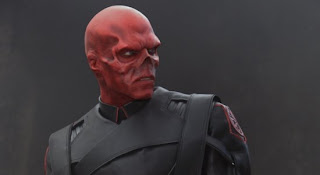 I love this guy. Hugo Weaving stars in two of my favorite films, The Matrix & Lord of the Rings. Playing Schmidt, the villain in Captain America (and a nasty Nazi and perhaps something else…but no spoilers here), he oozes danger the way Agent Smith in The Matrix does. Despite a few moments of faltering in his German accent, I bought him in the role and enjoyed him immensely. Later he emerges as Red Skull who appears to be the sunburned lovechild of Darth Vader and The Mask. Not a good look but yet a GREAT look for this big, bad villain that Captain America must defeat.

By the time the big, climactic battle took place I was, for lack of a better word, kinda over it. Several epic battles had already taken place showing off the weaponry, lots of stuff blowing up, bad guys being really bad, Captain America’s awesomeness as well as all the special effects. And in what should’ve been the biggest, baddest, best battle in the whole film, I felt I’d already seen it and was a bit fatigued by it (the thought, “again?” entered my mind). 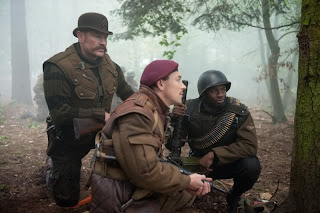 When Captain America recruits his own band of brothers to help with his next mission, he chooses from a rough and tumble, odd mix of POWs he had previously rescued. Okay, I can go with that. But cue the stereotypes, the French man with a thin mustache and beret, the Italian with a cap, the red-headed Irish-American with giant sideburns and a bowler hat. And what’s worse, they wear these same stupid “outfits” in battle. Captain America’s team doesn’t need uniforms or special clothing apparently! At one point they’re high in the alps about to attack a bad-guy train and they’re flouncing around on the cliff edges in their Disneyworld “It’s a Small World” outfits. My sister tells me this is the film staying true to its comic-book roots, so I guess in that case I can forgive it. But for moviegoers who aren’t familiar with the comic book series, they may, like me, find it a tad ridiculous. Speaking of silly outfits, I think in the future any time a well muscled man wears a t-shirt WAY too small for him, he shall forthwith be branded as Captain America, it’s a moniker I believe could really stick.

I really enjoyed the film, I liked the atmosphere it created plus I’m always a fan of fighting the Nazis (Indian Jones-esque) . Plus with the added strength of a cast including Stanley Tucci and Tommy Lee Jones, any small qualms are easily set aside and I let the entire experience just flow. I was told to stay until the end of the credits to see a preview for The Avengers and can I just say to you reading this, don’t bother unless you are a huge fan. The credits go on for days and the preview is hardly a preview. Still, Captain America is a fun ride, I enjoyed it and hope you do too! 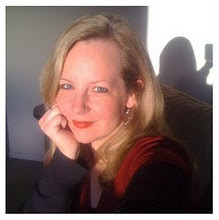 (Geno) - Valerie Tanswell is beautiful, funny and a great writer. I thank her for this piece!

Patrick Stewart explains why animation is the most powerful movie genre.

Rosie O'Donnell talks about her working relationship with Oprah