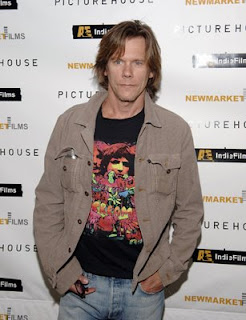 He's a good guy, it's good he didn't get hurt....
Page 6:
Kevin Bacon wasn't footloose enough.
The Hollywood star tried to chase down a thug who swiped his BlackBerry at a Seventh Avenue subway station Thursday, sources told The Post. The brazen mugger managed to escape and was at large yesterday.
Now the thief is a lot less than six degrees of separation away from a coveted cache of A-list celebrities and boldface names likely programmed into Bacon's 'Berry.
The robber boldly swiped the "Footloose" star's cell at 10:50 a.m. Thursday at the B, D and E station at 53rd Street and Seventh Avenue, sources said.
Bacon didn't give up the BlackBerry easily. The star took off after the crook, but lost track of him as he raced through the station's crowd, the sources said.
The numbers for Bacon's wife, Kyra Sedgwick -- who plays a cunning detective on the hit TV drama "The Closer" -- is no doubt stored in the phone, possibly along with dozens of other box- office stars who have graced the big screen with Bacon.
on May 24, 2009

Paris Hilton thrown off of luxury boat for fooling around with her boyfriend in the bathroom! 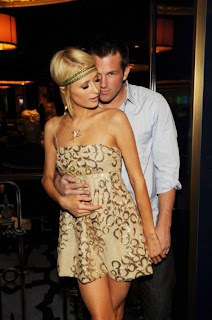 Mirror:
Smutty Paris Hilton has been booted off a luxury boat - for getting up to naughtiness with her boyfriend in the bog.

She and Doug Reinhardt had to walk the plank after Elton John's fella David Furnish caught the heiress trying to, like, shiver Doug's timbers on a party yacht at Cannes A source said: "David met Paris at the Hotel du Cap and invited her to a party on his friend's yacht.

"As soon as Paris arrived she had her tongue down Doug's throat. Everyone kept saying how inappropriate they were being but Paris didn't care who was looking.

"They got so worked up she dragged Doug below deck so they could have some private time.
"But as they were closing the cubicle door so they could tear into each other, they were caught out.
"David spotted them and the captain was furious. He kicked them off for unsociable behaviour.
"Everyone congratulated the captain."
Let's just hope they washed their hands...
on May 24, 2009 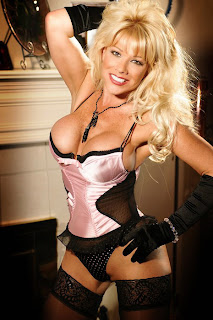 Geno's World can add another famous reader to our ranks! The star of HBO's "Cathouse" Air Force Amy has been kind enough to post links to Geno's World at the official Bunny Ranch site. Amy has started a new Twitter account: http://twitter.com/TheAirForceAmy and is following Geno's World http://twitter.com/Genosworld updates there. Amy is redesigning her official website and promises great things at http://www.airforceamy.com/ Obviously the site is NSFW. If you feel guilty, go to www.ewtn.org to pray.....
on May 24, 2009

Video: You're acting is good, but how is your bacting???

Brian May talks about the rumors of Adam Lambert joining Queen. 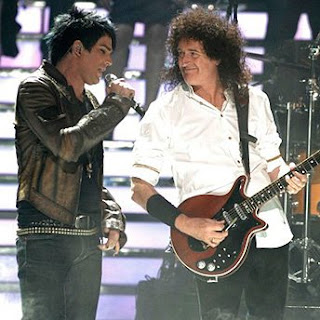 Initially I was very against the idea. But after thinking of Adam singing those classics with such a powerful guitarist, I'm having second thoughts....

Rolling Stone: After Adam Lambert’s killer performance with Queen on Wednesday night’s season finale of American Idol, rumors flew that he had already been offered a job singing with the band. That’s slightly premature, according to the band’s guitarist, Brian May. “Amongst all that furor, there wasn’t really a quiet moment to talk,” May tells Rolling Stone in an e-mail interview. “But [drummer Roger Taylor] and I are definitely hoping to have a meaningful conversation with him at some point. It’s not like we, as Queen, would rush into coalescing with another singer just like that. It isn’t that easy. But I’d certainly like to work with Adam. That is one amazing instrument he has there.”
May, whose band recently ended a four-year-long partnership with singer Paul Rodgers, is comfortable with Idol as a launching point for the careers of rock singers. “You’d have to define ‘legitimate’ first,” he writes. “The long-term answer has to be that, if you have enough talent and enough will to succeed, you will get there by whatever route presents itself. Once you have scaled the castle walls, with the sword in your hand, it matters little how you got there. I’ve not always been positive about shows like this, but there is no doubt that it offers a door to some real genuine talent along the way.”
“Both those boys are well worthy of big success,” May continues, in regard to Lambert and Idol winner Kris Allen. “So it’s pointless for someone like me to stand on the sidelines jeering. I’m confident Adam will make great use of this wonderful opportunity. I hope I’m there to see it.”

Video: No Doubt talks about each member having their own tour bus & taking their kids on tour.