Video: Robin has her eggs hatch in her nest next to the White House.

Video: Jessica Alba gets pulled over by the cops as paparazzi argue and fight with each other! 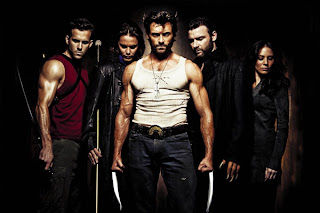 Firstshowing: I just stepped out of a screening of X-Men Origins: Wolverine on the Fox lot in Los Angeles and before it started, director Gavin Hood stopped by to introduce the film. He spent most of the time thanking us for coming to this screening and seeing Wolverine the way it should be seen, in theaters, and talked about how many difference there were between the final cut and the early leaked version. He then mentioned that Marvel has a tradition of hiding easter eggs in their films, and it's no exception for Wolverine. They've hidden multiple secret endings on different prints and theaters will be showing different versions.

Fox is a bit desperate to try and get people in theaters on May 1st for the opening and this definitely seems like a very unique decision to try and bring people in. While we've seen plenty of easter egg endings, like in Iron Man last year, we haven't seen multiple endings like this in a long time. Hood didn't say how many different endings there would be. As for the other differences between the leaked version and the final cut, Hood explained that there were 400 unfinished visual effects shots and that there was no score, unfinished sound mixing, and unfinished coloring. However, he didn't mention anything about differences in footage.

I will say, quickly, that I enjoyed Wolverine and wouldn't call it great, but liked it a lot more than I was expecting. I think my expectations had been brought down considerably because of all the negative buzz from the leak. However, seeing a finished and polished version was what made all the difference (I never saw the leaked version anyway). As for the secret ending we saw tonight, I'll only say that it featured Deadpool, but I won't say anything more, as I don't want to spoil the ending for anyone. We'll let you know when we hear any more about the secret endings in Wolverine, including how many there are and what they are.

Video: woman hires a stripper to stand in for her at her high school reunion!

Video: Heidi Montag and Spencer Pratt get married again. Heidi throws the bouquet and much more.