Video: Aubrey O'Day parties with Dj Am and Paris Hilton at Sundance!

Video: A painting by Russia's Prime Minister Putin is sold for more than one million U.S. dollars at a charity auction in St Petersburg.

New "Wolverine" photo sent by Hugh Jackman who says the movie will be badass! 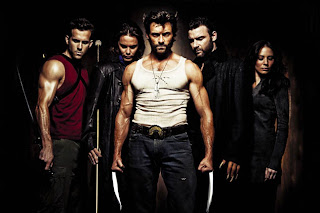 I'm counting the days!!!
Aint it cool:
Email from Hugh Jackman regarding WOLVERINE reshoots!-->
Hey folks, Harry here... Apparently Hugh tried to send this to me yesterday. I never received his email. Today, a concerned fairy godmother connected loosely between myself and the man-god Hugh Jackman, tells me that apparently I'm ignoring an email from Hugh Jackman. Interesting... so we begin a series of communications via another party between Hugh and I... and sure enough we discover that I can not get mail from FOX.COM. Apparently they can't send out to me, yet I can mail in. INTERESTING. Suffice to say, we worked out the tech angles and I got the email and the picture from Hugh.
Now, before we go on to this - you should know that officially this is what is happening. You won't hear from any official source the problems that have occurred on this film. That said, there is very very good news. DARK KNIGHT's rather phenomenal success is helping the creatives behind WOLVERINE to unleash the sort of Wolverine that we're hoping for, let's hope for the best, cuz honestly wouldn't we all want an amazing WOLVERINE movie... set in Japan... ahem. HELLFIRE CLUB... well, if we are ever to see any of that - this one has to work. Let's hope that the work in frozen Vancouver will do exactly that.

Hey Mate- Would you mind posting this? Thank you for your support! HJ
Hey everyone -
It's Hugh Jackman, sending this note from freezing Vancouver. I have read a lot of your online comments regarding the footage that we are currently shooting and I share your passion for the Wolverine character and the movie - I owe it all to you guys!
I wanted to reach out and let you know that due to scheduling conflicts with certain cast members and location/weather considerations, we had to wait until now to shoot a couple of scenes. Please rest assured that WOLVERINE will be badass and hopefully meet all of your expectations. I am stoked by the positive response to the teaser, which clearly reflects the tone and scope of the film. If you like that, we've got much more in store!
In the meantime, here's an exclusive shot of some characters you may recognize...
Cheers,
Hugh
on January 18, 2009

Video: Darius Rucker talks about being the first African American to have a #1 country record since 1983.