Playboy model Genevieve Gallen says Verne "Mini Me" Troyer had sex with her 10 times a day! 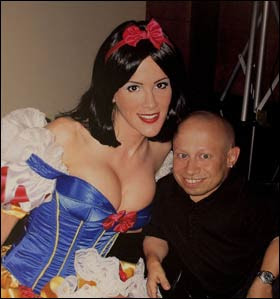 Verne couldn't ask for better press!
News of the World:
MINI-ME pocket rocket Verne Troyer proved size didn’t matter the night he first bedded blonde Playboy model Genevieve Gallen.
Because the 2ft 8in tall Celeb Big Brother star took the beauty who would become his wife to HEIGHTS of passion she’d never dreamed of.
After he’d hopped on a CHAIR first to reach the bed, of course.
Curvy 5ft 6in stunner Genevieve, 36. reveals: “We had to be creative—but because of my yoga experience I could get into the right positions to make it work. And I was soon head over heels in love with Verne.
“We could have sex up to 10 times in a single day. We’d do it for 45 minutes and he would just keep on going as I had orgasm after orgasm.
“He was a sex addict. He was then only the second man I’d ever slept with. He told me he’d had huge numbers of girls.” 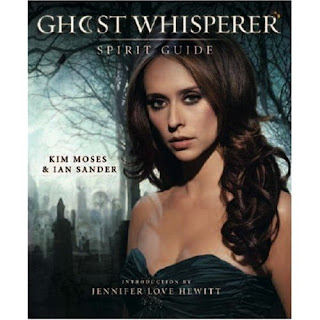 Say anything to sell the books!! :)
Pittsburgh live:
Kim Moses swears strange, unexplained things happen on the set of CBS' hit series "Ghost Whisperer," which might not be entirely fictional.
The Donora native and executive producer of "Ghost Whisperer" says her crew and cast insist that a house portrayed on the show -- the same house, incidentally, that was Boo Radley's home in "To Kill a Mockingbird" -- is haunted. For one thing, people often hear commotion coming from inside the house when they are standing outside, but when they enter, nobody is there.
"There was a time when Christopher Columbus wanted to sail around the world, and everyone said the earth was flat and he'd fall off the edge of the world," Moses says. "Who's to say that there aren't parallel worlds?"
Have you had issues with apparitions? Maybe she can help.
Moses -- along with Edgewood native David Conrad, who plays the recently deceased character of Jim Clancy on the show -- will be coming to Joseph-Beth Booksellers on the South Side today to meet fans and sign copies of her new book. "Ghost Whisperer: Spirit Guide" -- which has comprehensive information about the show, episodes, photos, interviews with the cast and more -- includes a how-to guide for communicating with ghosts. If you think your house might be haunted, never fear: The book gives instructions on what to do about the ghostly residents.
on January 04, 2009