The Spice Girls all seem to hate each other. 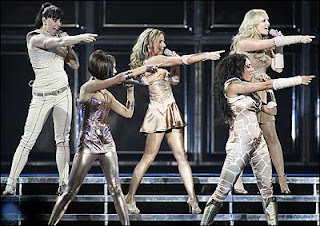 All my illusions about girl power are shattered!!!
News of The World:
I can reveal how GERI, POSH, BABY, MEL C and MEL B were at each other’s throats in rehearsals for the tour—just like the good old days.
The tensions have driven Geri to stick motivational Post-it notes on her head and around her dressing room to keep herself feeling positive.The girls have never quite come to blows, but as our man Ricky Hatton squared up to Floyd Mayweather, Ding! Ding!
I heard that:
ROUND 1: Mel B shouted at Geri for mucking up the dance routine for Stop. She yelled: "You’ve got to keep it together, if you spent more attention on your routines then it would be right."
ROUND 2: Posh had a pop at Mel B for dancing out of time to Spice Up Your Life. She snapped: "Next time we all have to stand in line and get it right."
ROUND 3: The others rounded on Posh for spending too much time chatting with pals TOM CRUISE and KATIE HOLMES when they turned up to watch rehearsals with baby SURI.
on December 09, 2007 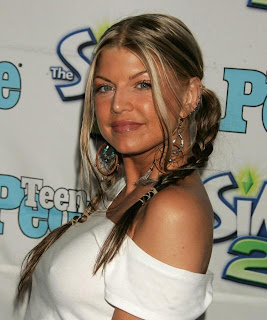 I also would like to reveal that I'm 100% natural...............
Star Pulse:
Fergie has slammed an American magazine for suggesting she has undergone cosmetic surgery on her nose and eyebrows. Two pictures of The Black Eyes Peas star - one from the 1980s, and one from 2007 - are printed side-by-side in the current issue of Us Weekly, and a surgeon tells the publication it's likely Fergie has had a rhinoplasty procedure.
But the 32-year-old has denied the claims, and admits such speculation upsets her so much she has seen a therapist.
Fergie says, "One of those (celebrity) magazines says I've had a nose job and an eyebrow lift, which is completely untrue. Personally, I see a therapist. It's hard, it hurts my feelings. I call my hypnotherapist and cry and let it go. That's what I do (to cope). I think that they nitpick these days so much and it's just got to the point where it's ridiculous."
And Fergie isn't the only celebrity angry with this week's issue of Us Weekly - actress Scarlett Johansson is threatening the magazine with legal action over claims she had undergone plastic surgery on her nose
on December 09, 2007