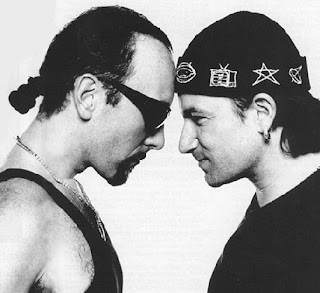 250 Concert goers? U2 is done.......Wait. What? Unannounced concert appearance for charity? Never mind...............
Star Pulse:
U2 stars Bono and The Edge showed up unannounced and played as a warmup act at a charity concert in London.
The show delighted the 250 people who attended the fund raiser on Friday night for Mencap, a charity that campaigns for equal rights for children and adults with learning disabilities.
''Don't tell Larry (Mullen) and Adam (Clayton) we've done this,'' Bono joked about his other two band mates from the small stage at London's Union Chapel.
Bono and The Edge - performing as a warm-up act for Biffy Clyro, a Scottish rock group - played four of their songs: ''Stay,'' ''Desire,'' ''Angel Of Harlem'' and ''Wave Of Sorrow,'' a track written for their 1987 album Joshua Tree.
A member of the audience, Simon Dowling, 20, from Newcastle, northern England, said he was shocked when the U2 stars suddenly appeared on stage.
''I've used all the battery on my phone taking pictures of them,'' he said.
on November 25, 2007 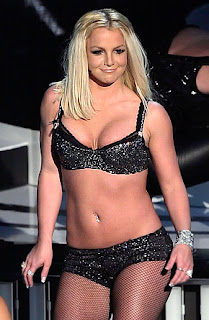 It would be safer to leave the kids in the care of a lion that hasn't eaten for 3 weeks...............
Entertainmentwise:
Pop train wreck Britney Spears is apparently in the final throes of adopting Chinese twins.
The singer has revealed to friends that she has reached the final stages of talks with an adoption agency and plans to go ahead with adoption very soon according to the News of the World.
Friends have revealed that Britney is considering the adoption of the six year olds to fill the hole left after her custody battle with K-Fed that has left her with very little visitation rights to her own two children.
Britters has also apparently spent $50,000 on her own funeral. Apparently splashing out the cash because she fears an untimely death due to her outlandish lifestyle.
A source close to Brit tells the NotW “It doesn’t seem that Britney has thought this through completely. Adoption and a funeral? The two don’t exactly go hand-in-hand.“Paying for a funeral is a sensible thing to do – but not when you’re only 25!”
Brit may well be planning to go ahead with the adoption because of the good press earned by other celebs who have adopted from other countries such as Angelina Jolie and Madonna.
on November 25, 2007